THE GREEN PARTY IN KENSINGTON & CHELSEA 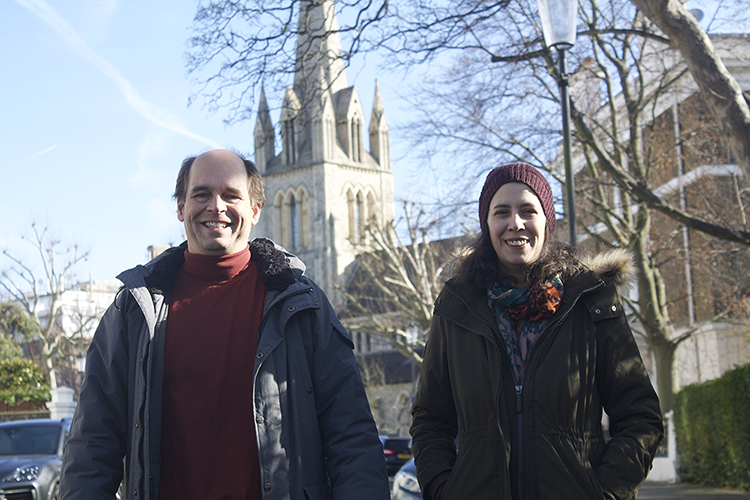 Fabian Frenzel is the Green Party candidate for Norland Ward. Fabian is an academic, teaching at Oxford Brookes University. Hailing from Germany, he came to the UK to do a PhD in 2005 and has built his career here ever since. He lives in Kensington with his wife and two small children.

“London is a fantastic city”, says Fabian, and adds “I really want to contribute to making it even better”. Fabian is passionate about the challenges of climate change, air pollution and road safety. “Much can be done on a local level, from better transport, to decent housing and flood prevention.”

Look back to the flash flooding of July 2007, and both the Council and Thames Water were full of promises that things would be different. Fast forward 14 years to the disastrous flooding of July 2021, and things have stayed depressingly the same in Kensington and Chelsea.

Thames Water have failed to get to grips with the risk of flooding in the Counters Creek basin that roughly follows the border between Kensington and Hammersmith, but our council has done nothing to change this.

We're ready with a plan.

It is clear that Sustainable Urban Drainage Systems are a key element of the flood defences that are needed to protect Norland’s residents.  These vital works allow rain and storm water to drain into the ground rather than overload the inadequate sewage system.  The types of works include:-

- the creation of permeable road and pavement areas

- the collection and redirection of roof drainage

The Council should be pushing much harder to bring in funding for these projects: it has the example of Hammersmith right next door, where many schemes have been developed since 2007, both in partnership with Thames Water and independently.  RBKC has also been slow to ensure that developers are maximising their use of these projects in the Borough.

Greens on the London Assembly have been sounding the alarm on flooding. Our local Green Party Assembly member Zack Polanski AM has challenged the Mayor several times on the risks of surface water flooding to 200,000 homes and businesses - and he will be working at a local level to protect both those people and properties.

We are experiencing a transport revolution, as more and more people agree that travelling in cities can and should be healthy, safe and fun. Active travel is the future - walking, cycling and a range of low impact forms of assisted mobility. We need to create neighborhoods that encourage and promote healthy forms of travel.

But in the Borough, pavements are often too narrow, many road crossings are not safe, and air and noise pollution remain unacceptably high.  These types of issues were high on the list of concerns when we surveyed Norland residents over the last few months.  Yet even though car usage is low among our residents, spending on roads and cars still seems to be a priority for the current council leadership.

Some simple steps can address these problems -

- widening pavements across the ward, prioritizing those currently too small to accommodate prams and wheelchairs

- enforcing the ban on scooters on pavements

As a Green party councillor, I will  work in collaboration with residents to help create people-friendly streets.

The Council has pledged to be carbon neutral by 2030, in 8 years’s time. This is welcome news, but so far there is too little action to achieve this aim.

This is particularly the case with regards to council-owned homes in Norland ward. Carbon neutrality is not even listed as a priority in the current housing plans for the borough, while residents need to put up with single glazed windows and lack of proper insulation.

All the while central government funding is available to pursue upgrades, but Kensington only uses these funds in a few selected projects, making progress painstakingly slow.

We need to develop proper zero carbon housing upgrades, to begin within the next three years, across the whole borough. This includes the installation of insulation and ventilation, and new heating systems.  And we should also consider installing more district heating systems, which can provide low and zero carbon electricity and heat to private homes as well.

As a Green party councillor, I will promote zero carbon homes through action not words.

Street markets can work in tandem with more established retail to the benefit of both - but parts of Norland are not currently well served.  I want to see new markets created to benefit all parts of the ward.

The recreation of Norland Road Market is of particular interest. Site of a market until the regeneration projects of the 1960s, the pedestrianized Norland Road today offers itself as a possible location for a farmers’ market.

Portland Road’s junction with Holland Park Avenue offers itself as another potential site - a market on this wide section of the road would increase footfall for businesses on Holland Park Avenue and provide incentives to open new businesses along Portland Road shop fronts, including new cafes and restaurants. Widening pavements and calming traffic in this road would support this development.

As a Green party councillor, I will collaborate  with businesses and residents to conceive of new plans for these areas, and help build flourishing street retail.

Residents deserve better
One of the frustrating things about the current council majority is its antagonistic relationship with Transport for London and the Department for Transport.

The controversial removal of the cycle lane on Kensington High Street has cost residents hundreds of thousands pounds, tax money which could have been used to improve the borough. Worse still: Because the Council has been reluctant to engage transparently and straightforwardly with TFL and Central Government, it has been frozen out of central government schemes for road safety improvements, causing RBKC citizens to lose out even further.

It does not have to be like this
As a Green party councillor, I will work independently and constructively across party lines to deliver on people- friendly streets, flood prevention, and zero carbon housing.

RBKC has not put enough effort into childcare provision, particularly in the vital early years. The early years provision in the Borough is one of the most expensive in all London.

While other councils provide additional financial support for working parents’ early years childcare costs, engage parents in regular dialogue and prioritise support for holiday play schemes, Kensington and Chleasea has reduced the number of nursery it runs. It does not even appear to follow its statutory requirement to publish its childcare sufficiency analysis to parents on an annual basis.

Are children an afterthought of this council?

As a Green councillor, I will work to improve early years and other childcare services in the Borough, and put children first.

I believe strongly in collaborative working - with residents, businesses as well as with the London Mayor and central government to ensure that residents get the best services possible.

Our neighbourhood needs independent representatives standing up for residents. It seems the current council majority is taking voters for granted. They have been in power for decades. It is time for some fresh ideas.

One of the frustrating things about the current council majority is its antagonistic relationship with Transport for London and the Department for Transport.

The controversial removal of the cycle lane on Kensington High Street has cost residents hundreds of thousands pounds, tax money which could have been used to improve the borough. Worse still: Because the Council has been reluctant to engage transparently and straightforwardly with TFL and Central Government, it has been frozen out of central government schemes for road safety improvements, causing RBKC citizens to lose out even further.

As a Green party councillor, I will work independently and constructively across party lines to deliver on people- friendly streets, flood prevention, and zero carbon housing.